Sail with the sun (not just the wind)

I've always wondered how the solar panel system works on a sail boat whether its luxury or a passenger vessel or a racing boat. How to implement solar cells or panels on a sail or just on the deck or on the roof? How efficient will they be? How would they interact with wind? What useful applications can we get from these solar panels on a boat?
Here are some cool concepts that i think are well worth looking into.

First concept sail boat is called the Volitan. This design is so revolutionary that some people think its not even going to make it to production. None the less this sail boat definitely has the cool factor to it and it looks very feasible in theory. This video shows how the concept could work.

Whats intriguing is the sail is utilizes both solar energy and wind energy to generate power for the boat. The sails are connected to a twin 220 HP/DC electric motor which has two suspended wings to help navigate the boat. In addition, a hydraulic/servo system located in the wings activates the sleek Volitan's unique performance sail system. It's dimensions are around 105'3 in (length), 24'8 in (height), 92'7 in (width with solar body) and 24'9 in (width at low body). This boat is designed by Dr. Hakan Gürsu, founder/chief designer at the prestigious Turkish design firm DesignNobis of Ankara, Turkey and Sözüm Doğan an assistant designer at the same firm. (Source)
Whether it looks feasible or not, it certainly looks possible on paper... 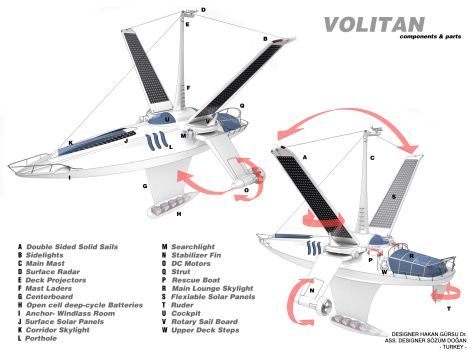 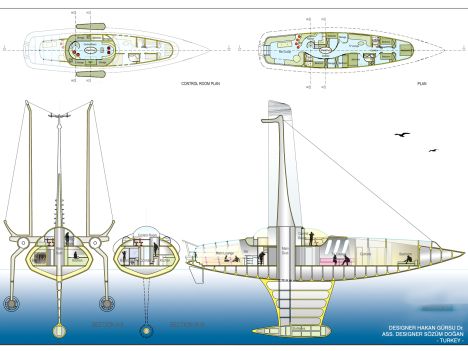 Of course, there are still many ups and downs to this concept but none the less, they need to hurry up and make a prototype and test it to see how it does.

The second solar boat is called "Solar Wing" developed by an Australian company called SolarSailor. They do mostly passenger vessels and ferries which are powered by solar panels and fuel (hybrid system). 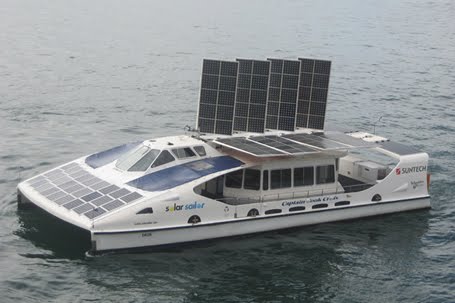 "This latest development, the new solar catamaran ferries, is a very bright chapter in the environmental commitment" says the GM of SolarSailor company Cameron Halliday. This ferry is functioning in Hong Kong harbor today. This type of boats are excellent solution for one of the most polluted cities in the world.

The CEO of SolarSailor, Robert Dane, certainly knows the future of this technology and the direction its headed. 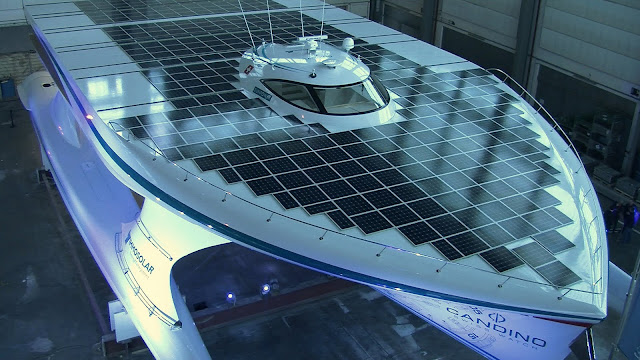 This sexy, sleek, modern day ark for today’s Noah, is a catamaran-styled yacht measuring at 102 feet long, almost 50 feet wide and 24-1/2 feet high (31 meters by 15 meters by 7.5 meters), but its most interesting feature is that it’s covered with 5,382 sq ft (500 sqm) of solar panels that gather sunlight and help it sail the sea nice and smooth.(Source)

"The boat can travel for 3 days and 3 nights before it needs to be recharged". That is pretty efficient. Weighing at 60 tons with a top speed of 15 knots can fit only about 15 people.

What i would like to see: In the near future, what i would like to see is a sail that is actually made up of solar cells and not a sturdy solar panel. What I'm talking about is a solar sail that does what today's normal sail does. The solar sail should, bend, curve, flex, retract, basically do everything that a normal sail would do and still produce solar power for the boat. I'm talking about implementing flexible solar panels onto a sailboat. The technology is already available, it just hasn't been implemented yet.
So basically take this flexi-solar panel and make a sail out of it. I have not sailed before and I'm pretty sure its very hard. But these sails would provide dual purpose. Catch the wind AND the sun at the same time.

My Opinion: Installing solar panels, or solar cells on a boat is a great idea and a leap forward in the marine world and the green energy revolution, but most of the concept boats and the currently existing solar sail boats have a very low speed. I personally would not want to crawl through the sea even though it would be powered 100% by solar cells. I would rather have both speed and eco-friendliness. If we want more speed then we have to go with a hybrid system (solar + fuel). I personally would rather drive a hybrid Mustang that is eco-friendly than a Prius, if given the option.
Posted by Naveen Selvam at 9:17 PM

Naveen Selvam
Houston, Texas, United States
I've always had a passion for green energy in particular solar energy. My experience ever since undergraduate has been with solar cells, solar design. solar power generation, transmission and distribution. All the projects i've ever done has involved solar energy. I have completed my Masters degree in Engineering Physics with specialization in solar energy. I have worked as an Electrical Engineer at NASA for two years. This gave me a great experience in working with cutting edge technology. I have a strong background in the principles and practices of electrical power systems, engineering design, and construction. I believe that passion determines how much impact you can have on anything you do and I'm very passionate about solar energy. I want to contribute my skills to create an awareness among the general public about solar energy and how we can utilize it in our everyday life. I was born in India, grew up in Detroit, Michigan since i was a kid and now live in Houston, Texas.